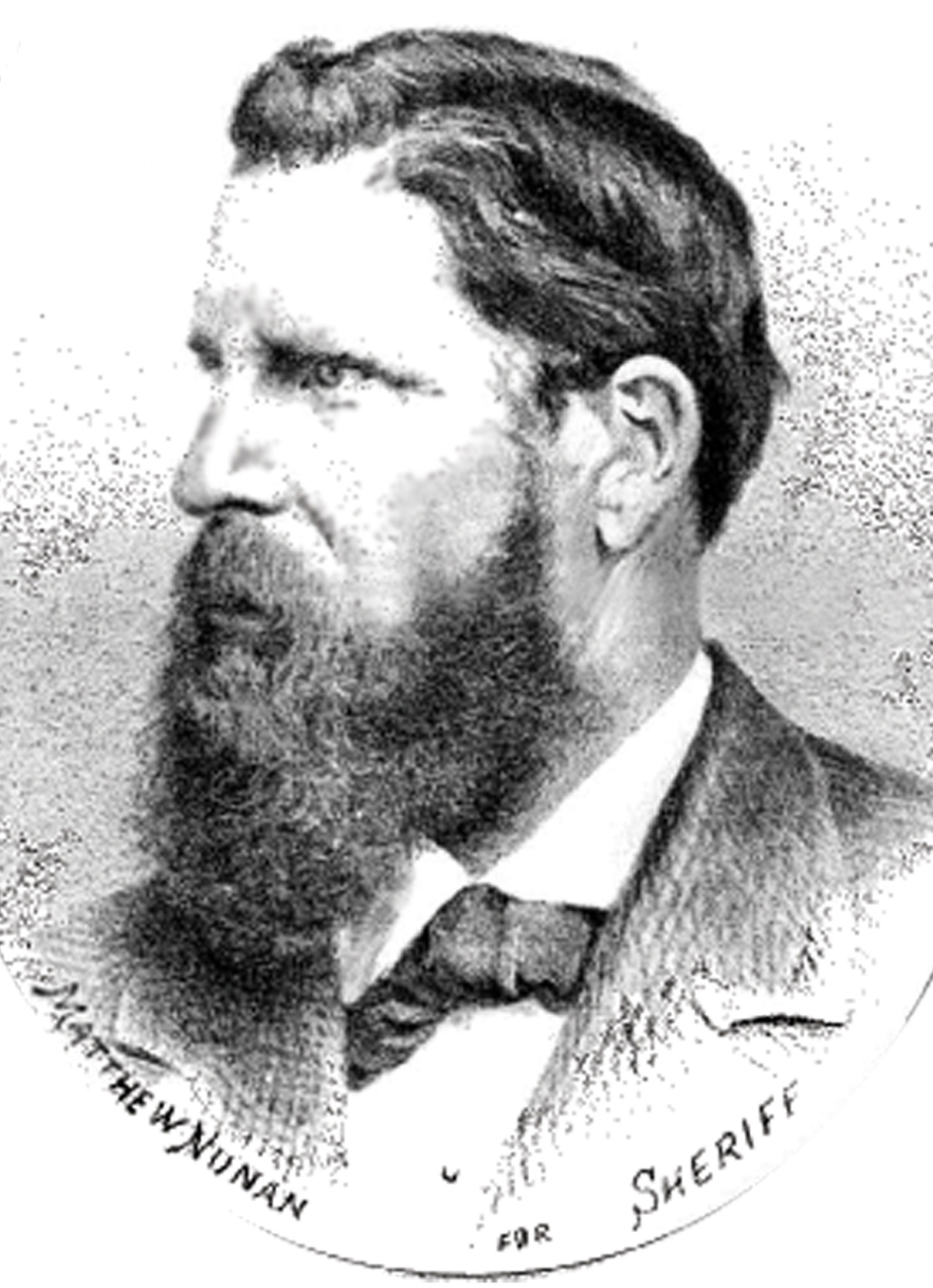 Matthew Nunan served two terms as San Francisco Sheriff in the tumultuous 1870’s, a time when the City was growing out of its frontier beginnings yet still held on to many of its frontier biases.

This was a period when anti-Chinese prejudice was institutionalized in San Francisco and it echoed throughout California. The result was violence, like the Chinese Massacre of 1871 in Los Angeles, and increasing local and state laws restricting Chinese immigration and citizenship.

In San Francisco, Sheriff Matthew Nunan would find himself at the center of the enforcement of a highly controversial anti-Chinese law passed by the Board of Supervisors that would result in significant changes in State law.

Matthew Nunan was born in County Limerick, Ireland probably in 1828. He was seventeen years old when the Great Famine hit Ireland-- a devastating potato blight disease that starved hundreds of thousands of poor Europeans between 1845 and 1852.

At the time, Ireland was particularly depended on its huge potato crop, and the famine became so terrible that over one million men, women, and children of mostly Irish lower class died of starvation. Another one million refugees left the country any way they could simply to save their lives. 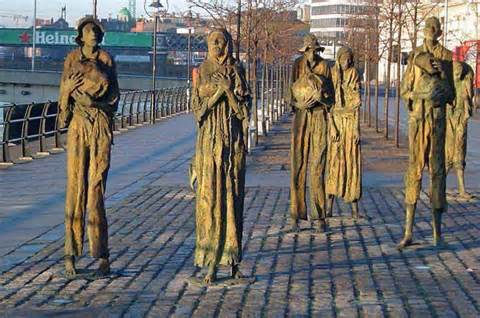 The Famine Memorial on the Dublin docks, Ireland.

Nunan joined thousands of Irish immigrants who fled to the United States in the late 1840's, when he managed to get passage on a ship to New York City. He found a job on an upstate farm near Lake Ontario making $10 a month, and in 1854 Matt Nunan became a naturalized citizen of the United States.

News of gold miners getting rich in California’s foothills was enough for Matthew Nunan to leave the East Coast and head for California. In 1855 he traveled by ship to Panama, crossed the Isthmus to the Pacific side via the Panama Railway and took a ship to San Francisco. 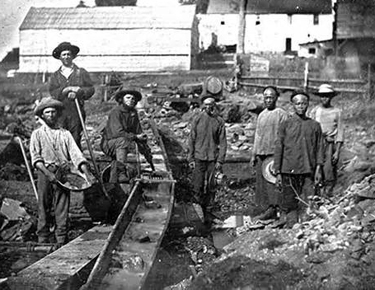 Nunan went inland and started working in mining in Nevada County, and later moved to Michigan Bluffs in Placer County. Nunan and several fellow prospectors made money working a group of land claims that became known as the “No Nothing Gold Mines”.

After four years of back-breaking work digging for gold, Matt Nunan gathered his earnings and came to San Francisco in 1859. Soon after he arrived, Nunan opened a grocery store at the northwest corner of Powell and Washington Streets.

In March of 1860 Nunan traveled to New York City to marry Delia Horn, who he had apparently met in New York City when he first came to America. Nunan and his new wife returned to San Francisco and his grocery business, which he relocated to the southwest corner of Bryant and Ritch Streets.

In 1866 he sold his grocery store and purchased an interest in the Mission Street Brewery at 608/610 Mission Street. And with that, beer brewing would become a life-long avocation for Nunan. In 1867 he moved the brewery to 1225/1267 Howard Street, near Ninth, and Nunan renamed it the Hibernia Brewery to honor his Irish heritage. It would eventually become the largest steam beer brewery operation in the world. 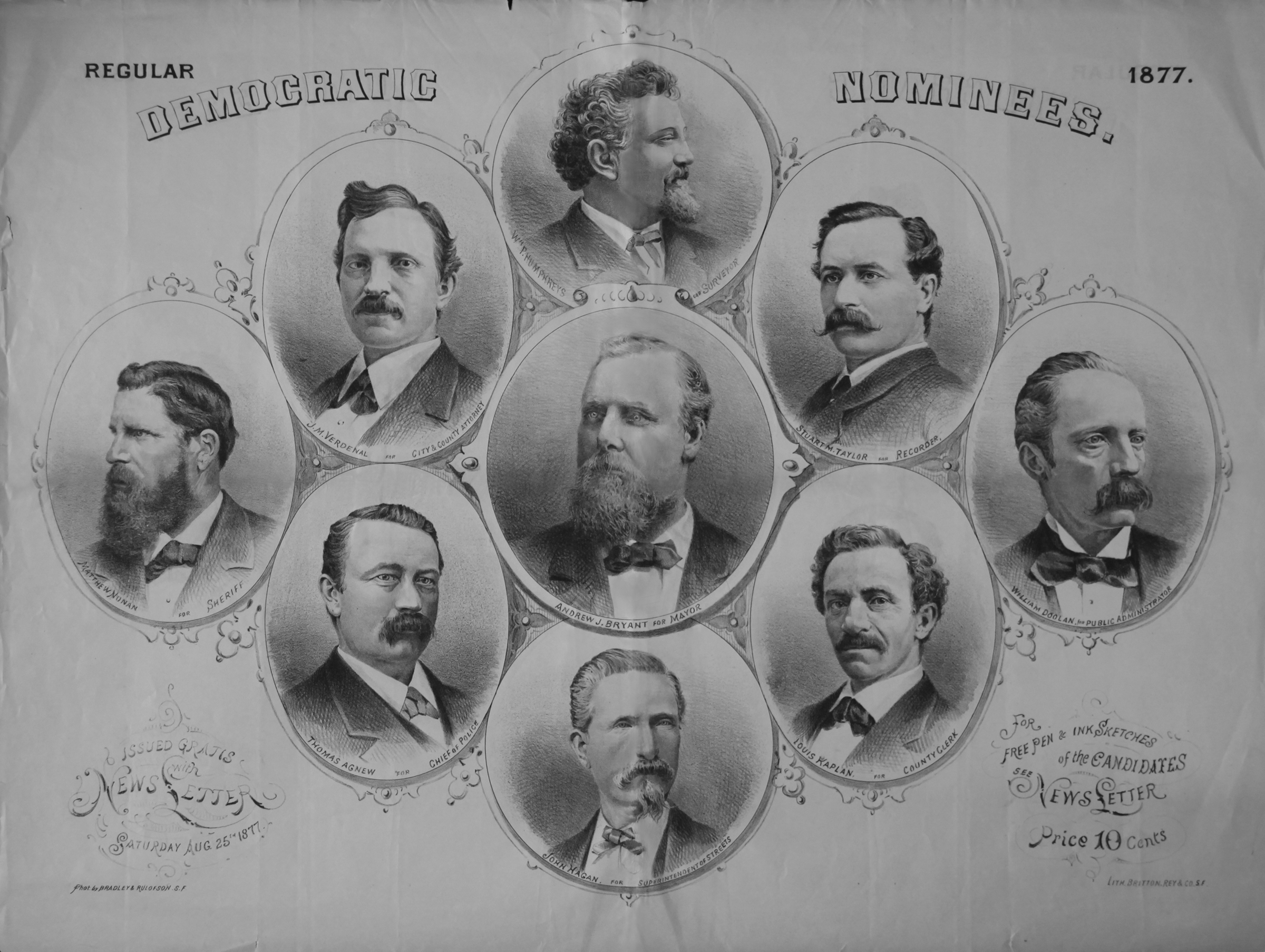 Nunan had always been active in local politics, having been a member of San Francisco’s first volunteer fire department and an officer in the state militia. While still managing his brewery, Matthew Nunan ran for Sheriff in 1875 as a Democrat and defeated the incumbent Sheriff, William McKibbin by some 1,315 votes.

At the time, the Sheriff’s term of office was two years and his salary was $8,000 a year. During his two terms as San Francisco Sheriff, Nunan’s administrative offices were located on the first floor of what was then called the “old” City Hall, across Kearny Street from Portsmouth Square.

This building, the former Jenny Lind Theater at Kearny and Washington Streets, became San Francisco’s City Hall in 1852 after the former City Hall (the Graham House) was destroyed in a fire in 1851. (This was also later the site of two successive San Francisco Hall of Justice buildings, and today is the location of a Hilton Hotel, at 750 Kearny Street.) 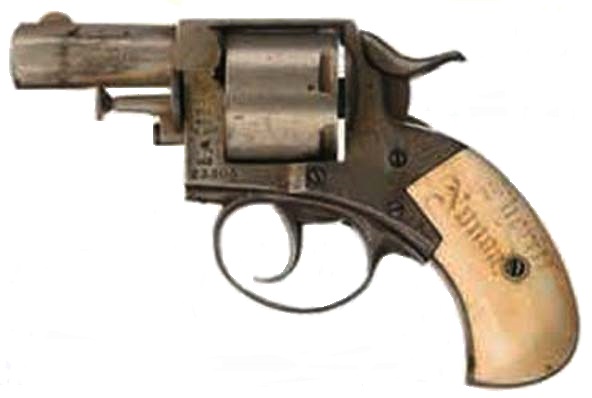 San Francisco’s “new” City Hall was a notorious fiscal scandal, taking almost 27 years to construct and built of over-priced substandard materials. It officially opened in 1899 and completely fell to pieces seven years later during the 1906 earthquake (today the site of the City’s Main Library at the corner of Grove and Hyde Streets).

Throughout his two terms as San Francisco Sheriff, Matthew Nunan continued to own and manage the Hibernia Brewery on Howard Street, which produced ale, porter, and a unique kind of lager called "steam beer". Although Nunan's brewery was almost completely destroyed in the 1906 earthquake, he had it rebuilt and in full production within 12 months.

Nunan’s time as Sheriff coincided with a virulent period of anti-Chinese sentiment in San Francisco and throughout California. Activist Denis Kearney formed the Working Man’s Party of California in 1877, with a rallying cry of “The Chinese Must Go”.

Kearney toured the State and traveled around the country with his racist message of immoral Chinese immigrants bringing their strange culture to California, taking jobs from white citizens. The irony here, of course, was that Kearney himself was an immigrant from County Cork Ireland. 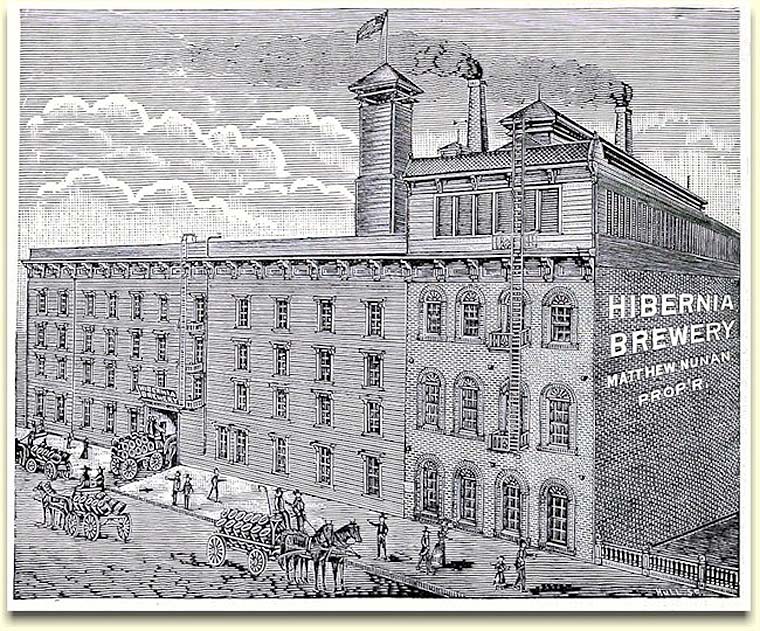 The Hibernia Brewery on Howard between 8th and 9th Streets. Nunan's passion for beermaking and his talent for business made this brewery at one time the largest steam beer producer in the world.

In an 1878 "Working Man's Party of California" speech, Kearney stated, “To add to our misery and despair, a bloated aristocracy has sent to China—the greatest and oldest despotism in the world—for a cheap working slave. It rakes the slums of Asia to find the meanest slave on earth—the Chinese coolie—and imports him here to meet the free American in the Labor market, and still further widen the breach between the rich and the poor, still further to degrade white Labor.

“These cheap slaves fill every place. Their dress is scant and cheap. Their food is rice from China. They hedge twenty in a room, ten by ten. They are wipped [sic] curs, abject in docility, mean, contemptible and obedient in all things. They have no wives, children or dependents.”

According to historian Ronald Takaki in “Strangers from a Different Shore”, 350 Chinese immigrants came to California in 1849 and 450 the next year, but by 1852 the number was more than 20,000.

Many Chinese laborers were hired by the Central Pacific Railroad to help construct the western portion of the Transcontinental Railroad from 1863 until its completion in 1869. Kearney specifically targeted the Central Pacific for providing so many jobs to Chinese laborers. One consequence of this new, easier way to get to California was that many more East Coast caucasians traveled to California causing greater competition for jobs and even greater resentment toward Chinese immigrants.

One of the complaints against newly arriving Chinese immigrants was that many were able to cut down living expenses and save money by having multiple families and workers sharing single apartments.

So in 1873 the San Francisco Board of Supervisors passed an ordinance making it illegal for any person to live in a space allotting less than 500 cubic feet per person. The proposed local law also included a provision directing the Sheriff to cut the hair of all sentenced male prisoners. 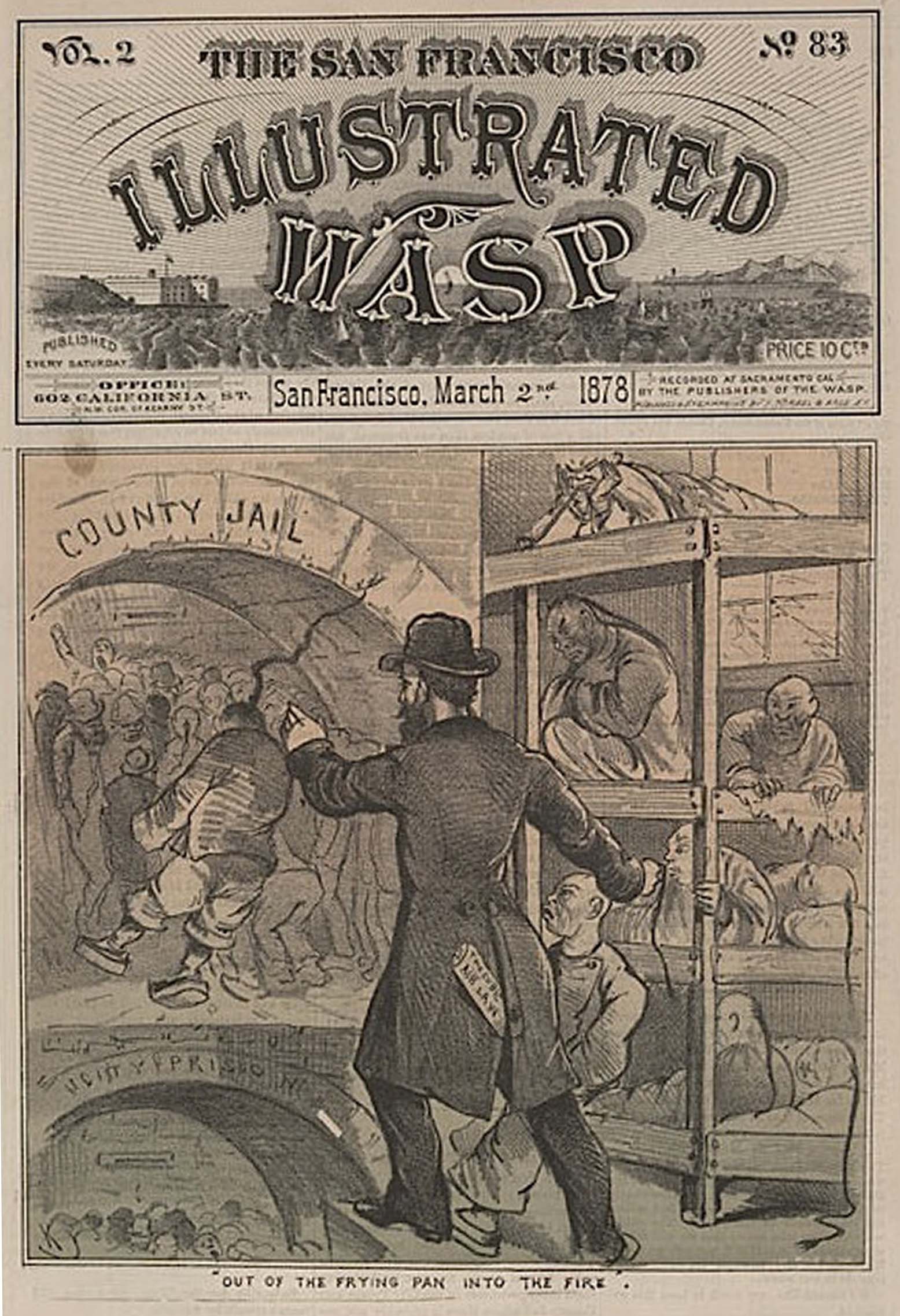 The March 2, 1878 edition of the "San Francisco Illustrated Wasp". The cartoon lambasts Sheriff Nunan for placing Chinese men arrested for violating the "500 cubic foot" law into a County Jail space of 100 cubic feet.

In April 1876 the California Legislature took up the matter and passed its own law making it a misdemeanor for any person to live in a room or apartment containing less than 500 cubic feet of space for each person. Violation of the law carried a ten-dollar fine or five days in county jail.

By 1876 San Francisco had a new Mayor, Andrew Bryant, who had no qualms about signing the haircutting ordinance into law after it passed the new Board of Supervisors.  Mayor Bryant and Sheriff Nunan both ran for reelection on the same Democratic ticket in 1877 and won.

The responsibility for enforcing the new law, specifically cutting off the hair of sentenced male prisoners, fell to the Sheriff Matthew Nunan and his deputy sheriffs.

These laws were specifically directed at the growing Chinese population in San Francisco, and throughout the State, and the “Queue Cutting” ordinance was particularly offensive to San Francisco’s Chinese immigrants.

It was the custom of Chinese men to shave the hair from the front of the head and to wear the remainder braided into a long queue. To cut off the queue was a mark of disgrace and believed to bring misfortune and suffering after death.

The purpose of cutting off the queues was not only to harass the Chinese, but also an attempt to get the Chinese to pay the ten dollar fine which was the penalty for violating the Cubic Air ordinance. So many Chinese men opted to spend the five days in jail rather than pay a ten-dollar fine that the jails were becoming overcrowded and expensive to run.

It was ironic that the men sentenced to jail for living in a space of less than 500 cubic feet were incarcerated in jail conditions amounting to 100 cubic feet. This irony was not lost on the local press, particularly with “The San Francisco Wasp” illustrated magazine, which printed a full cover cartoon of Sheriff Nunan taking Chinese men from a crowded crib and tossing them into an even more crowded jail.

While it is unclear how many queues the Sheriff and his deputies cut off, in April 1878 a man named Ho Ah Kow was arrested for violating the “cubic feet” ordinance and had his queue cut off. After his release from jail Ho Ah Kow enlisted the support of the Chinese Six Companies organization to sue Sheriff Nunan in Federal Court.

California Supreme Court Justice Stephen Field decided the case in an opinion that had a far reaching and historic impact on the rights of Chinese immigrants. 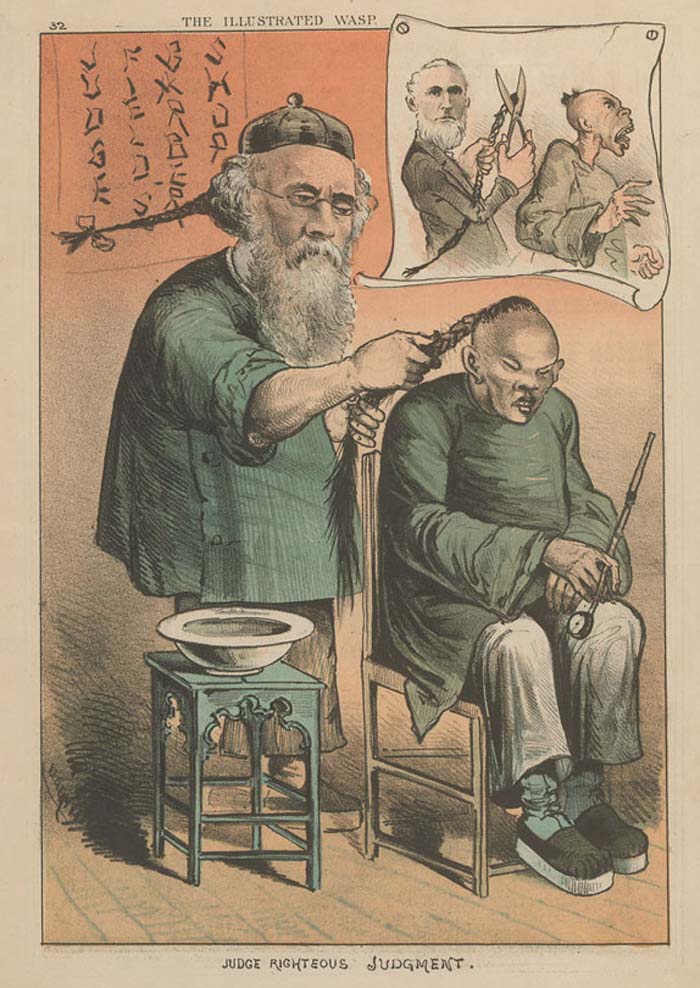 Justice Field ruled that the Queue Ordinance was a form of additional punishment within the “cubic feet” law, which the Board of Supervisors did not have the authority to enact.  The judge also ruled that the law was clearly aimed at the Chinese and was therefore a violation of the right to equal protection under the law for “all persons,” not merely “all citizens.”

Finally, because of the specific disgrace imposed upon the Chinese, the law was deemed a form of “cruel and unusual" punishment.

Justice Field’s decision was cheered by the Chinese community, but jeered by many others.

“The San Francisco Wasp” again lampooned the topic with a drawing of Justice Fields dressed in Chinese clothing and sporting his own queue. It showed him in “Justice Field’s Barber Shop,” braiding the hair of a Chinese man, under a picture of Sheriff Nunan having just finished using a scissors to clip a queue.

The “San Francisco Argonaut” newspaper called the court’s decision “sickly sentimentality”, and stated that any concern for the “souless heathen [Chinese]” “absurd” and “altogether ridiculous.”

The decision in Ho Ah Kow v. Matthew Nunan was read from the bench of the Supreme Court on July 7, 1879, only a few months before the end of Sheriff Nunan’s second term. During this period The Workingman’s Party of California was rising in popularity and reshaping San Francisco’s political scene.

Sheriff Matthew Nunan decided not to seek a third term. Thomas Desmond, the Workingman’s Party candidate, ran for Sheriff and succeeded Nunan. Nunan refocused his attention on business and the continued expansion of the Hibernia Brewery.

Matthew Nunan remained very active in San Francisco civic affairs, became a founder of a bank, and continued to manage the business of the Hibernia Brewery. He died on January 7, 1916 at his home at 452 Oak Street. He was 87.

“The Wasp”, weekly illustrated magazine published in San Francisco from 1876–1928.