California Sheriffs have been chosen by popular election since the state became part of the Union on April 1, 1850.

California’s original Constitution of 1850 makes no mention of sheriffs, but when the State Constitution was revised in 1879 a new section was added to the document which mandated that every county would have an elected sheriff (Article 11, Section 5). 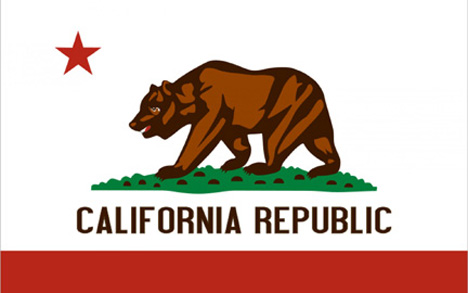 California’s current Constitution is based on the 1879 Constitution and has been amended many times. Today’s constitution continues to guarantee an elected sheriff in every county:

“California Constitution, Article 11, Section 1 (b):  The Legislature shall provide for county powers, an elected county sheriff, an elected district attorney, an elected assessor and an elected governing body in each county….”

Between 1850 and 1891 the constitution and state laws provided very little guidance about how county and state-wide elections were to be conducted other than to require that “All elections by the people shall be by ballot” (1849 Constitution, Article II, Section 6). 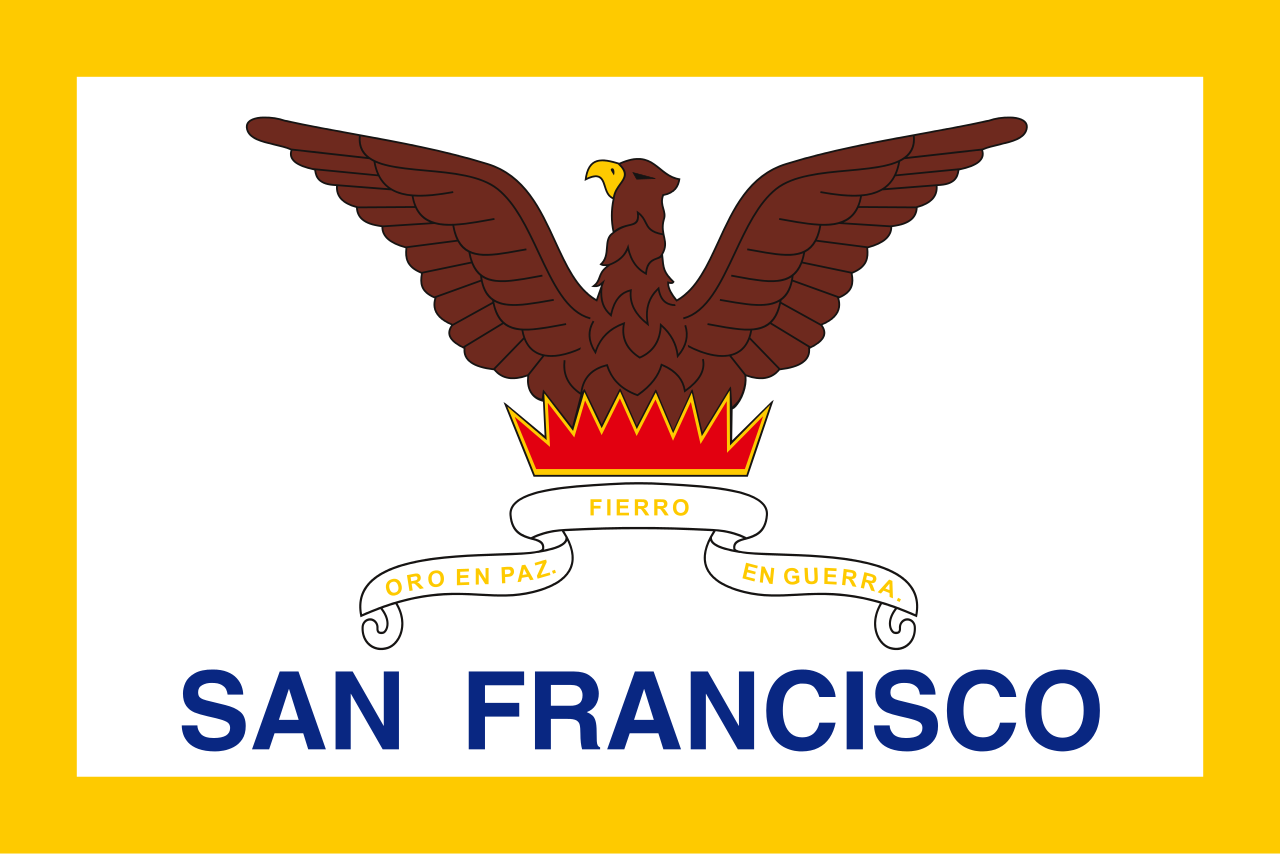 Since many voters were illiterate, political parties were more than happy to print up their own completed ballots for voters to conveniently take to the polls:

“Each party printed its own ballots in whatever shape and color it wanted. So did nearly every candidate. Sometimes there would be dozens of sizes and designs. If a voter wanted to change his ballot, he could scratch out a name and write in a substitute, or paste over part of the ticket with a sticker supplied by some rival candidate.” (“Tapeworm Tickets and Shoulder Strikers”, Richard Reinhardt, The American West -- Fall 1966.)

From 1850 until 1911 the elected term of the San Francisco Sheriff was two years. In 1911 the term was changed to a four-year term. The office has always been highly sought after, particularly in the early years when the Sheriff was allowed to keep all of the fees that his office generated (less expenses). Which made the Sheriff one of the best paid public officials in the county.

Without exception, San Francisco elections are spirited affairs. Until 1910, the office of Sheriff was officially partisan-- candidates were identified on election ballots and in the newspapers by their party affiliation. It was not uncommon for a sheriff candidate to be swept into office whenever a particular party won most of the offices for a given election, and then swept back out of office whenever their party fell out of favor.

The story of the first election for San Francisco Sheriff from the April 3, 1850 edition of the Daily Alta California.

In 1910, a San Francisco Charter amendment was passed eliminating the designation of political parties on the ballot and in the voter information handbook. In 1931 San Francisco’s three major newspapers, The Chronicle, The Examiner and The Call Bulletin, also discontinued identifying candidates by party affiliation.

Although today most San Francisco political candidates still tend to identify with a particular party, officially all county offices are non-partisan.

While incumbency is a traditionally a powerful advantage in an election, for San Francisco sheriffs being previously elected did not automatically guarantee re-election.

Of San Francisco’s thirty-six sheriffs, fifteen were defeated in their bid for another term.  One sheriff, Tom “Boss” Finn, managed to be defeated as an incumbent twice. He is the only San Francisco sheriff to serve nonconsecutive terms.

Two San Francisco sheriffs died while in office: Daniel Murphy in 1952 and Dan Gallagher in 1956.

Three sheriffs resigned from office before the end of their terms: John Coffee Hays (1853), John S. Ellis (1864) and Richard Hongisto (1977). Over the Department’s history there have been a number of acting/interim sheriffs appointed for a variety of reasons, some of whom later ran for the office.

As a result of resignations or deaths in office, four sheriffs attained office by appointment, rather than by election: Thomas Johnson (1853), Dan Gallagher (1952), Matthew Carberry (1956) and Eugene Brown (1978).  (Immediately after John Ellis’ resignation a special election for sheriff was held to replace him rather than having someone appointed).

The Sheriffs with the most elected terms of office were Michael Hennessey with eight, Daniel Murphy with five, Thomas Finn with four and Matt Carberry with three. These four Sheriff's combined to serve a total of over 83 years, accounting for just under half of the entire 170-year history of the Sheriff's Department.

The following chronology in three parts documents the dates of all San Francisco Sheriff elections, the candidates in each election, their party affiliation and their vote totals. Click on most graphics for larger view.

Just as San Francisco was beginning to establish itself as an emerging metropolis in the nation’s 31st State, the San Francisco Sheriff’s Department was also attempting to develop into a professional law enforcement agency.

The chaos surrounding the City, from the Gold Rush to the vigilantes of the 1850s and the subsequent population expansion, all proved to create serious challenges to public safety.

The rapid turnover of leadership in the Sheriff’s Department due to two-year elective terms initially hampered the Department’s growth and the creation of consistent application of the law. During this 50-year period San Francisco had 20 different Sheriffs. Relative stability to the Department and to San Francisco was not to come until the opening years of the next century.

Deputy Sheriff Thomas Johnson was appointed to replace Sheriff Jack Hays when Hays resigned from office in 1853. Johnson then ran twice for the office and was defeated both times.

Gorham did not seek re-election in September 1855.

The position of Sheriff was on the ballot in November 1856, Charles Doane was elected, but the election was voided by the California Supreme Court. Scannell served out his term through 1857 and did not seek reelection.

Doane originally ran unopposed in November 4, 1856 and received 7,0447 votes. After the Sheriff’s election was voided by the Supreme Court, Doane was officially elected for the first time on September 4, 1857.

Charles Doane for Sheriff as part of the People's Reform Ticket 1857.

The Independent Reform Party had George Hossefross as its candidate for Sheriff in 1853.

This was a special election to fill Ellis’ vacancy.

Davis was defeated in the election of September 1, 1867.

Opposing Ellis was Thomas J. Poulterer of the Union Party.

John D. Ellis was part the People's Party ticket in the 1861 election.

McKibbin was defeated in the election of September 9, 1875

Nunan did not seek re-election in September 1879.

Desmond was defeated in a re-election bid on September 7, 1881 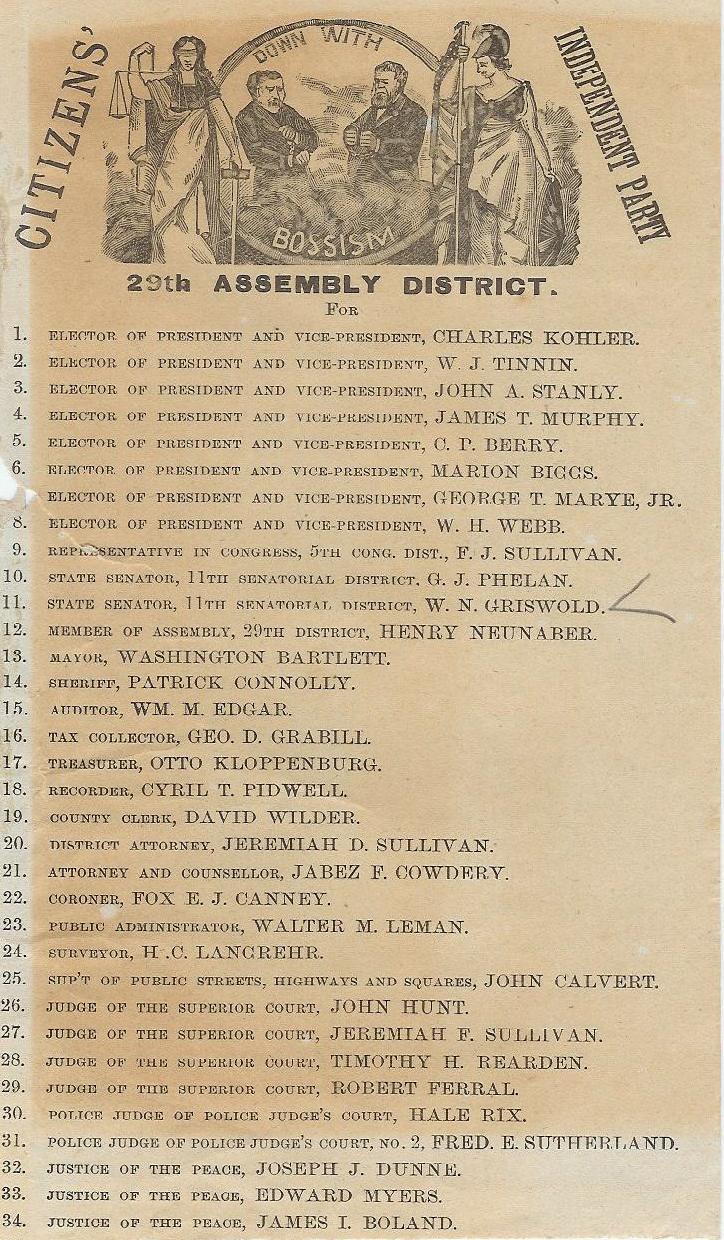 Sedgwick was defeated for re-election on November 7, 1882.

Connolly was defeated in a re-election bid in November 1884.

Hopkins did not seek re-election in November 1886.

McMann did not seek re-election in November 1888. 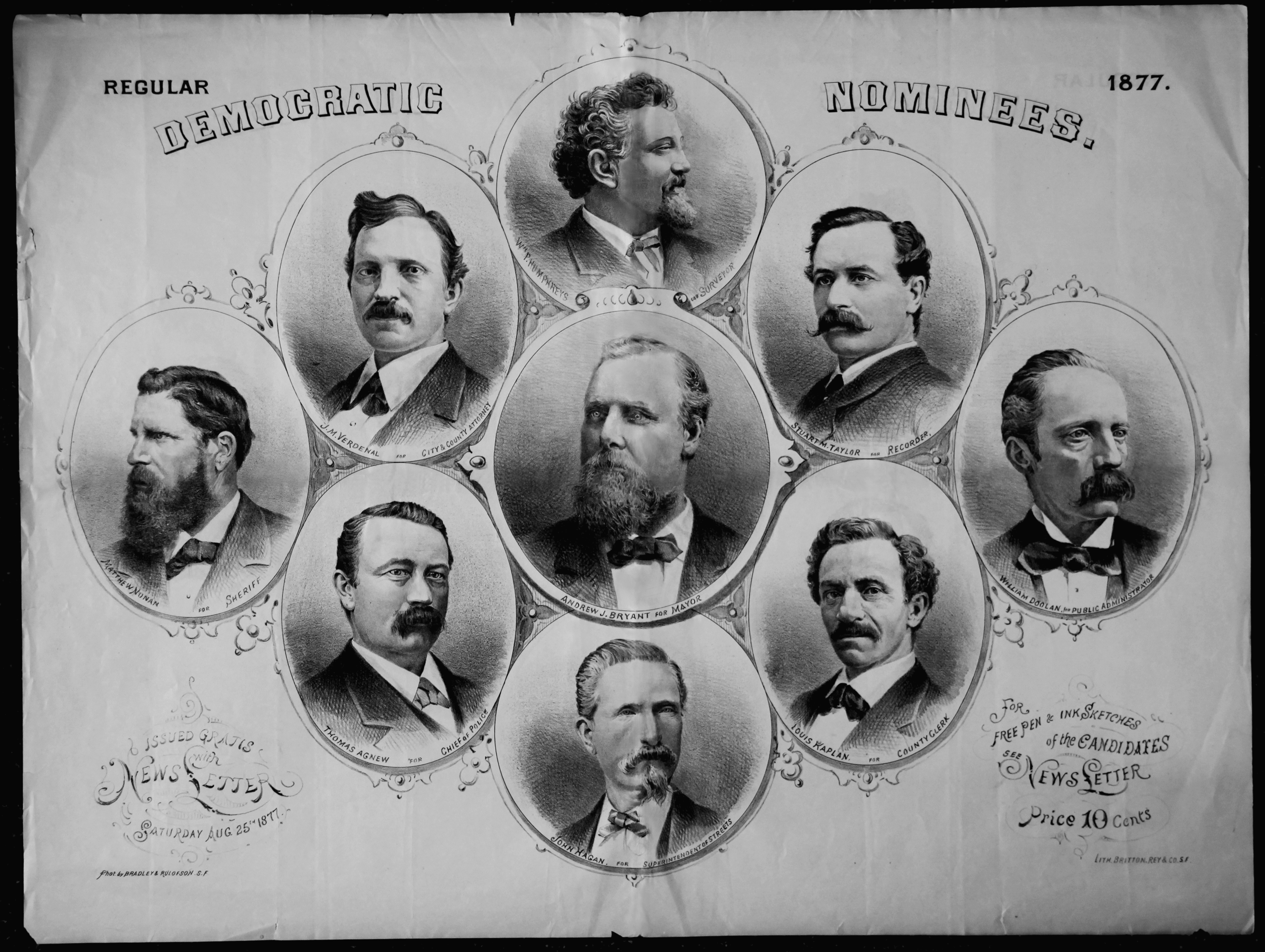 Laumeister did not seek re-election in November 1892.

McDade did not seek re-election in November 1894. 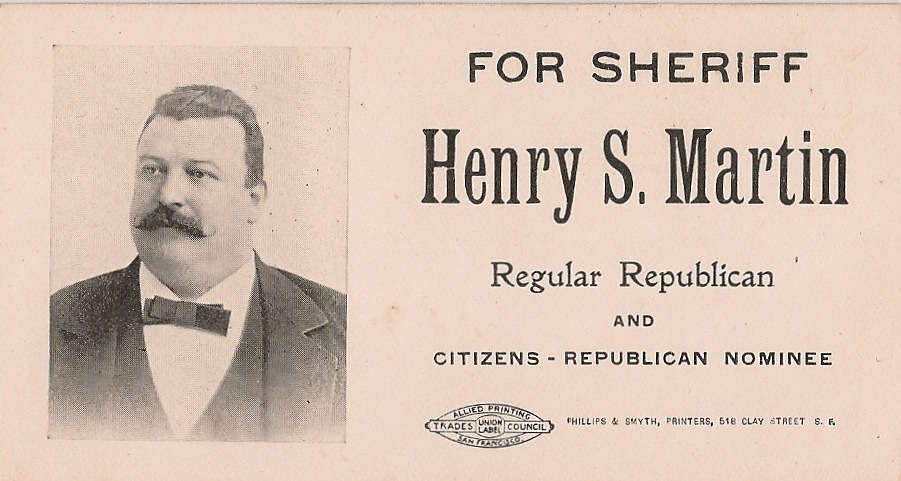 Sheriff Whelan and other “county” officers were given a 4-year term due to an obscure change in state law and a Supreme Court decision, Hale v. McGettigan, 114 Cal. 112, August 25, 1896.

In 1898 San Francisco voted in a new City Charter, changing San Francisco’s elected terms of office back to two years.

Whelan did not seek re-election in November 1898.

Martin served one year after the new City Charter called for new elections.
Martin did not seek re-election in November 1899.

A Department in Transition

This evolutionary 72-year period in the history of the San Francisco Sheriff’s Department was dominated by three Irish Americans-- Sheriffs Thomas Finn, Daniel Murphy and Matthew Carberry. These experienced law and order politicians combined to serve an amazing 45 years (62%) of that time as San Francisco Sheriffs.

But it was two other Irish Americans who may have played an even larger role in the Department’s and the City’s history during this period.

Sheriff Tom O’Neil’s leadership during the Great Earthquake and Fire of 1906, and Sheriff William Fitzgerald’s mission to construct San Francisco’s first modern jail pushed the Department’s political influence and vision farther than it had been since the vigilante days of 1856. 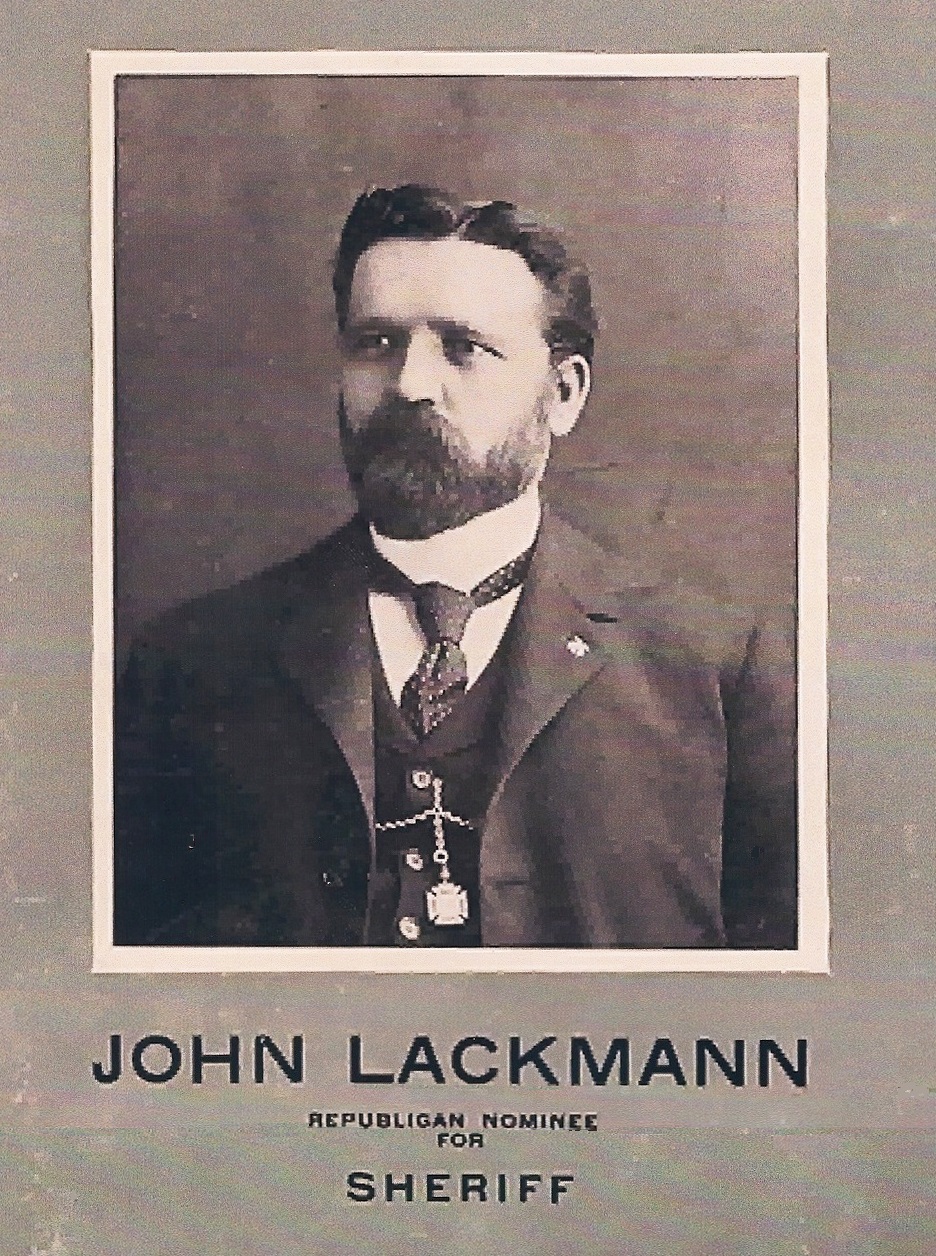 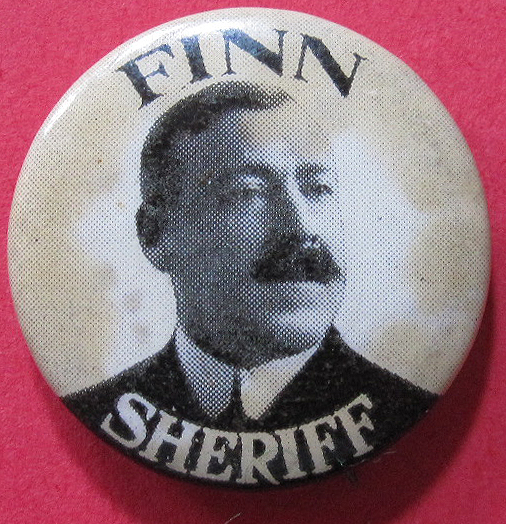 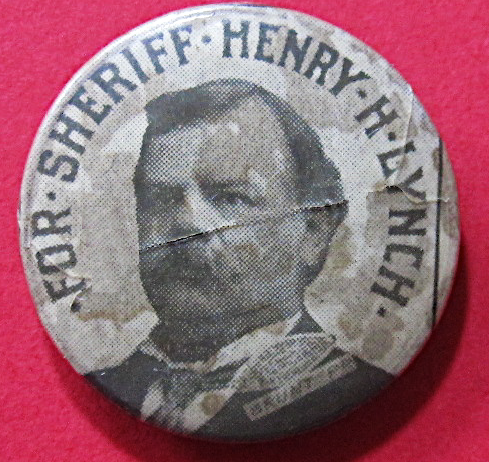 O’Neil was defeated for re-election in November 1907.

Dolan was defeated for re-election in November 1909. 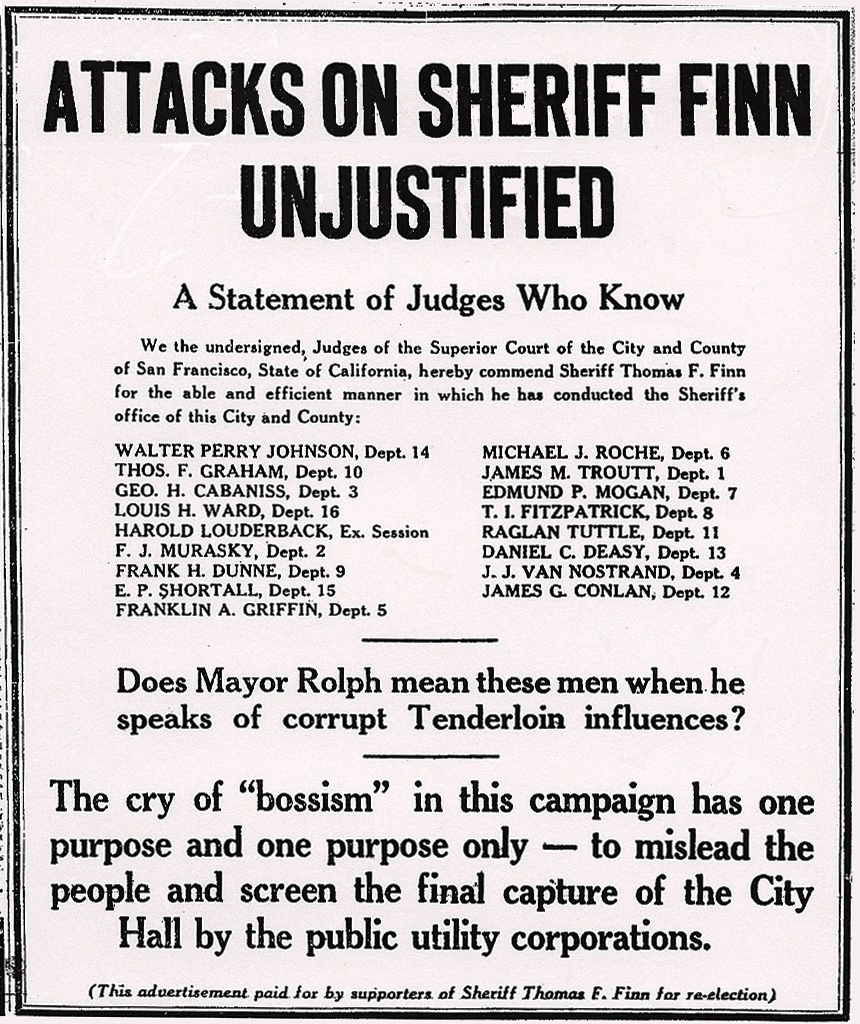 This was the first Sheriff’s election with a primary, which was held two and a half months prior to the November General Election.
In this version of a primary each political party fielded candidates under their banner and the candidate with the highest party vote total went on the General Election. There were 11 total candidates running for sheriff in the primary.

The only San Francisco election years in which Sheriff candidates had a primary were 1909, 1911 and 1915.

Finn was defeated in a re-election bid in November 1911. 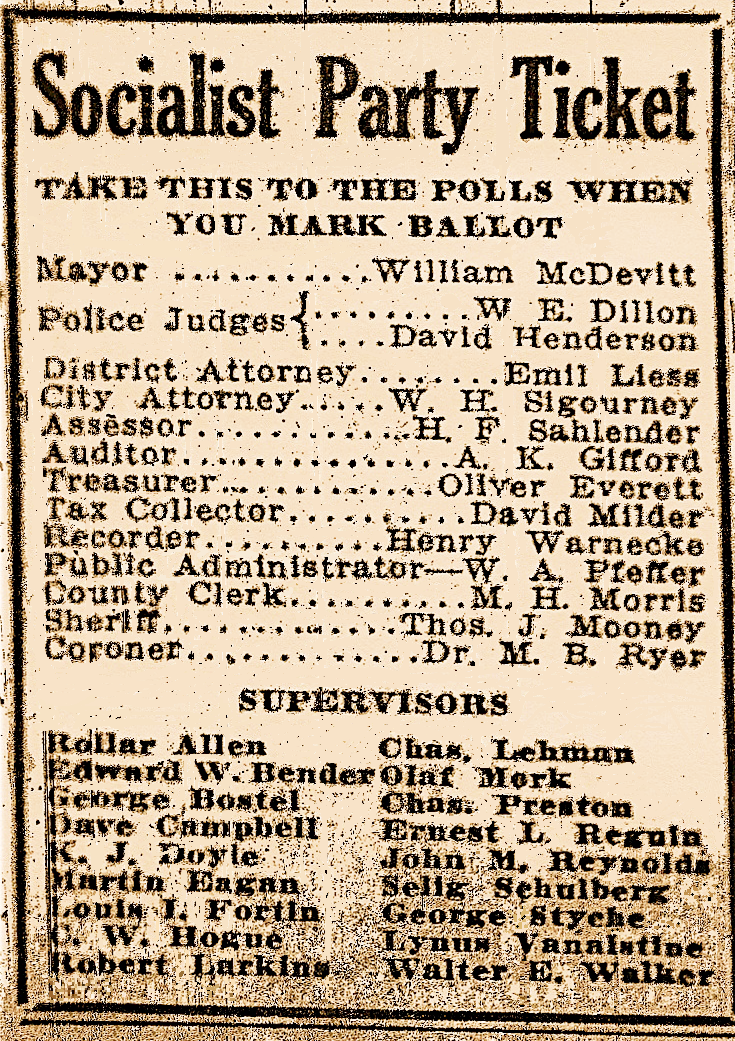 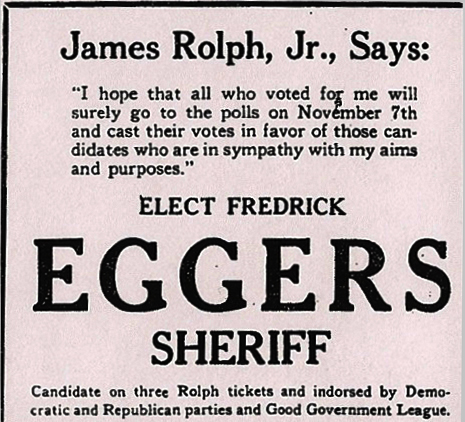 This election marked a permanent change in the Sheriff’s term of office from a two-year term to a four-year term.

Eggers was defeated in a re-election bid in September 1915. 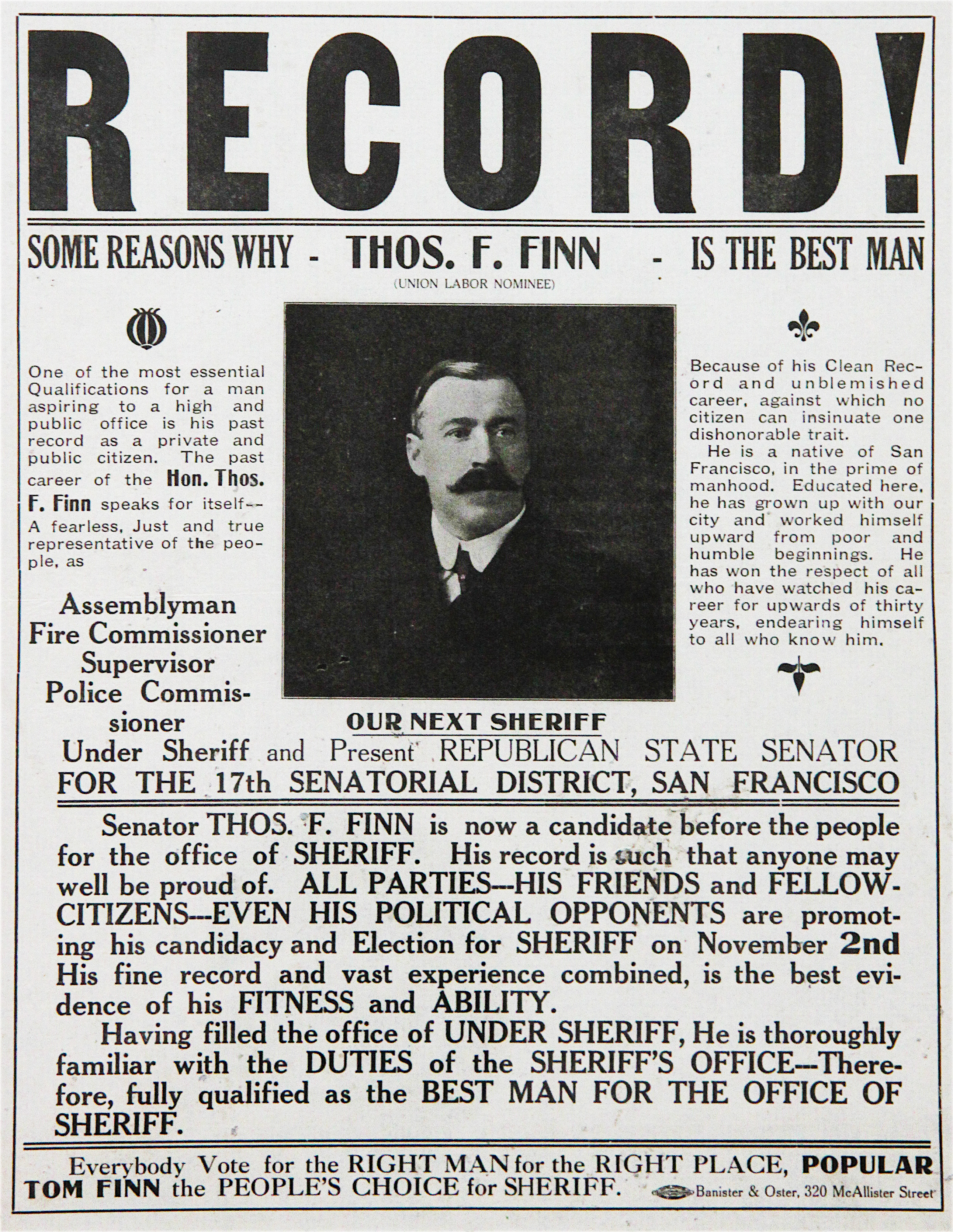 Finn was elected outright in the September 28, 1915 Primary election.

The primary election concept was abandoned starting with this election and “preferential voting” was implemented. 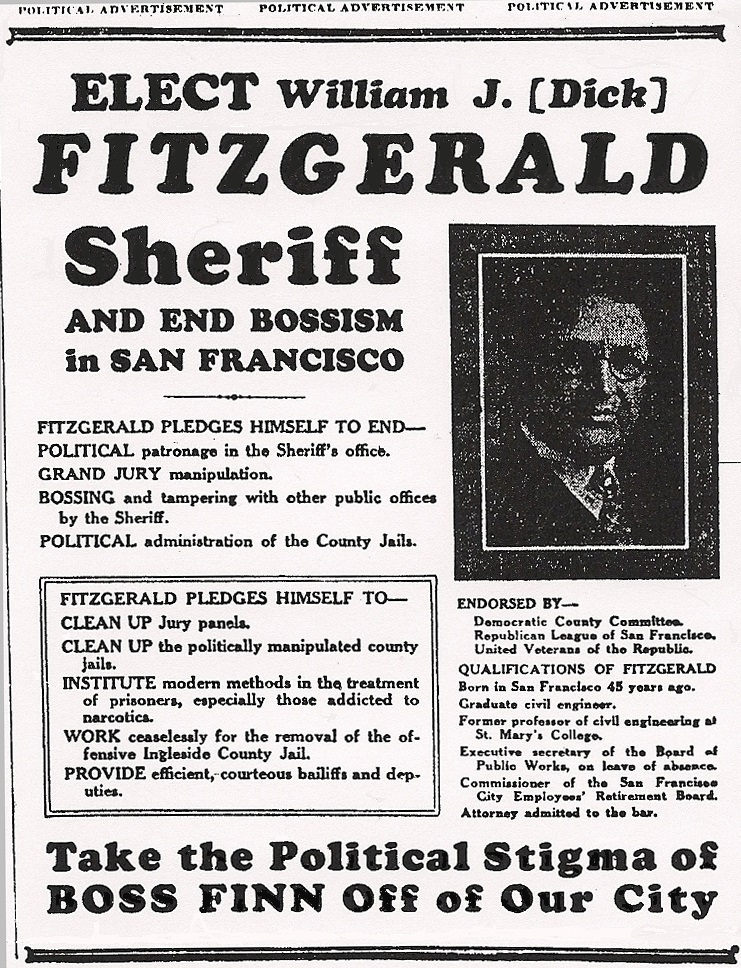 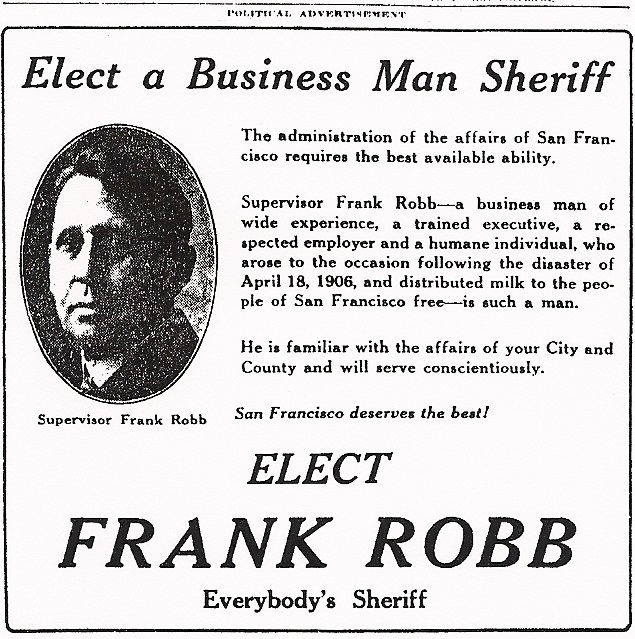 Finn was defeated in a re-election bid in November 1927.

Fitzgerald was defeated in a re-election bid in November 1935. 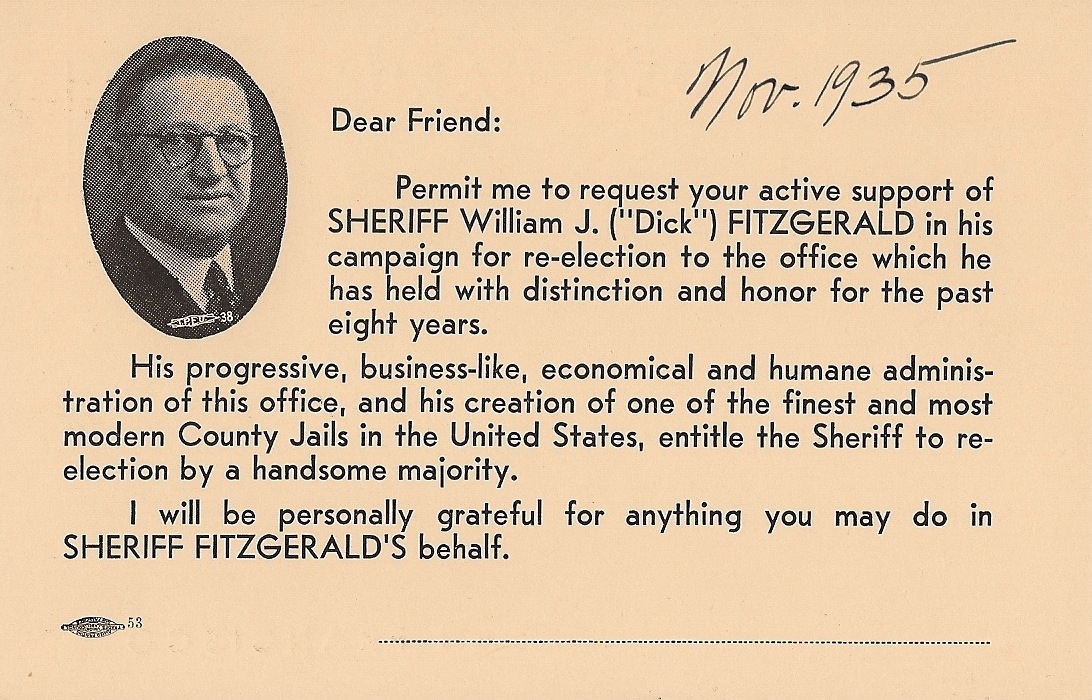 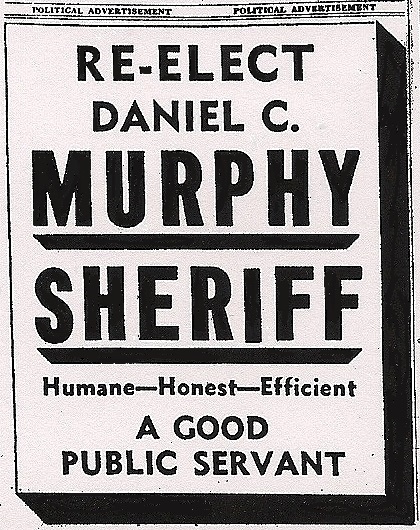 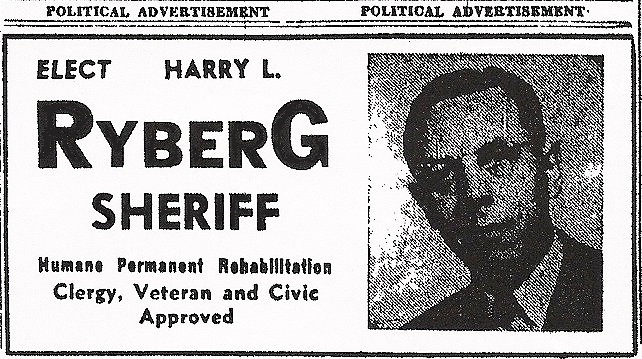 Board of Supervisors member Gallagher was appointed to complete Murphy’s term. 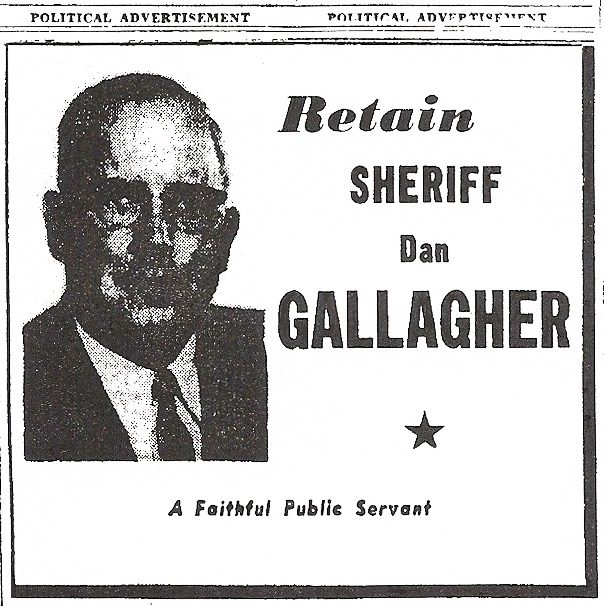 Board of Supervisors member Carberry was appointed to complete Gallagher’s term. 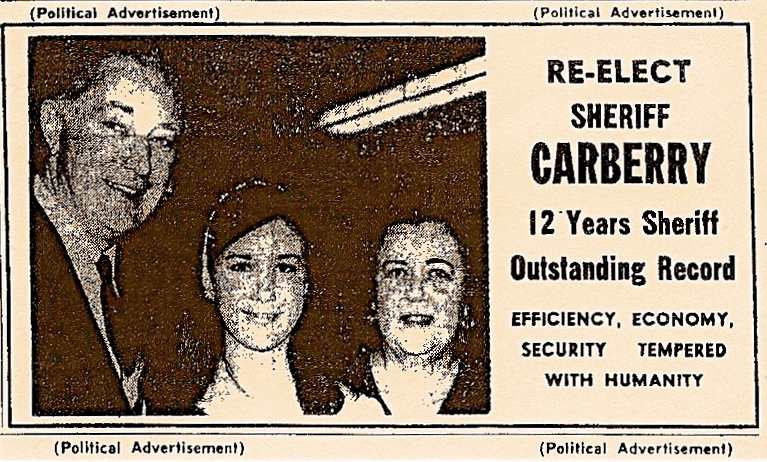 Carberry was defeated in a re-election bid on November 2, 1971.

Professionally, the Sheriff’s Department under Hennessey also dramatically increased supervisor and deputy training and at the same time took on an array of new law enforcement and security responsibilities. This era would culminate in the election of the first woman and the first Asian American as San Francisco Sheriffs. 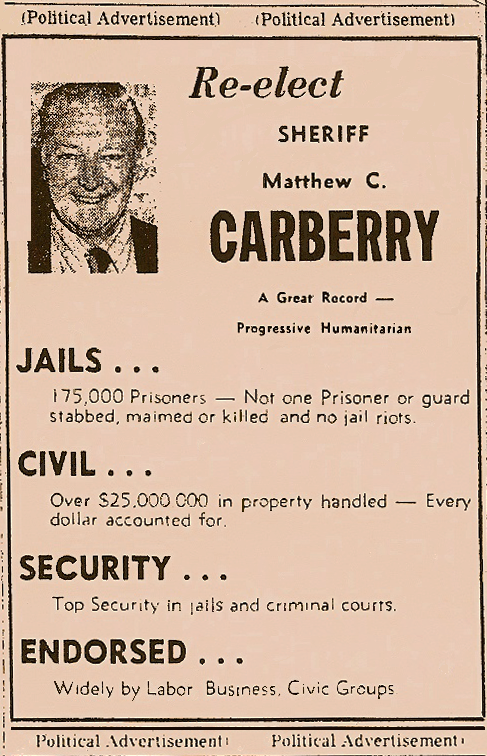 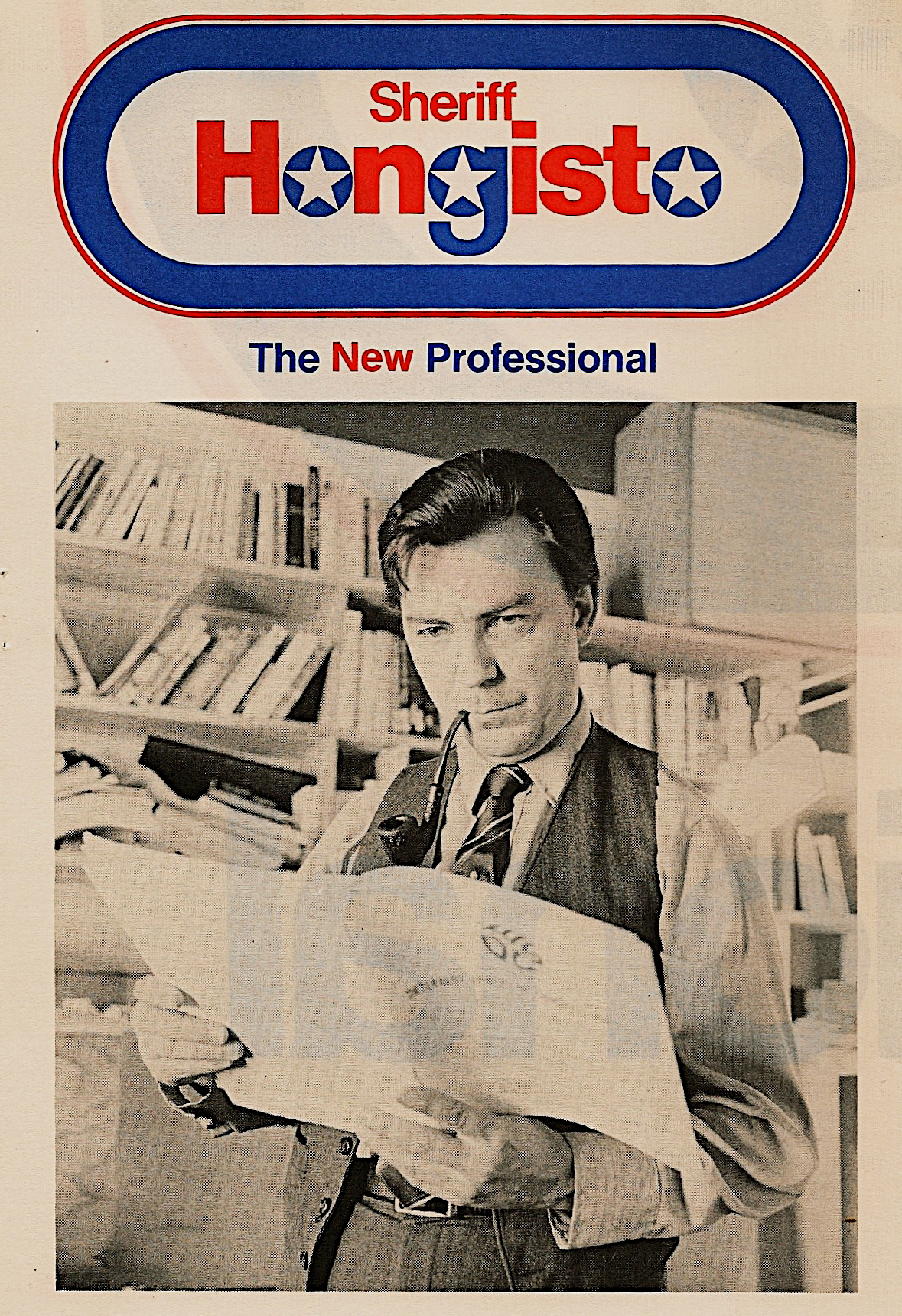 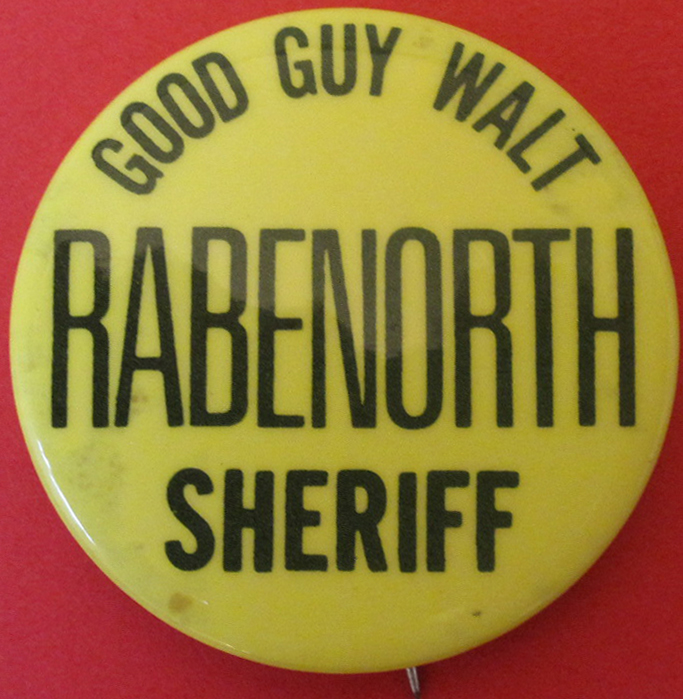 Hongisto resigned from office on December 1977. 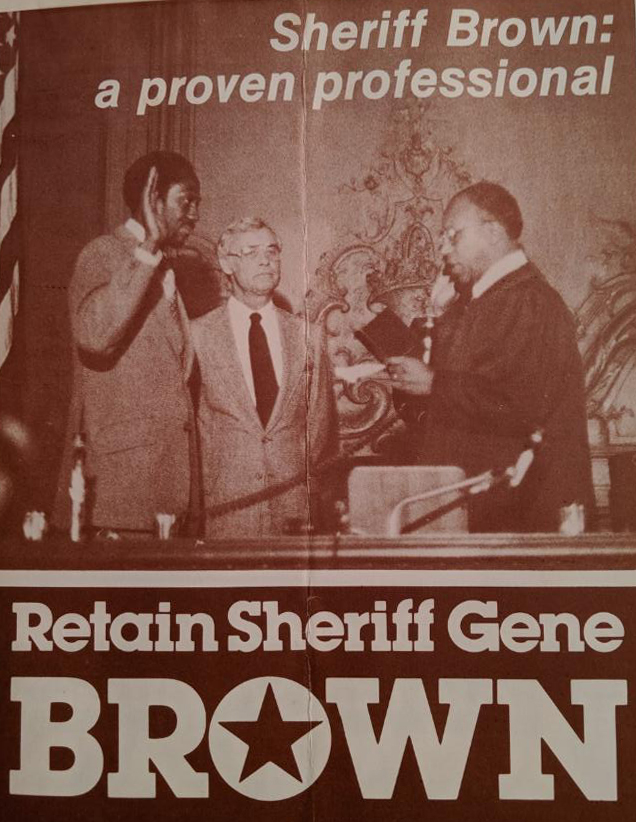 Community activist Brown was appointed to complete Hongisto’s term, and then was defeated in the election of November 1979. 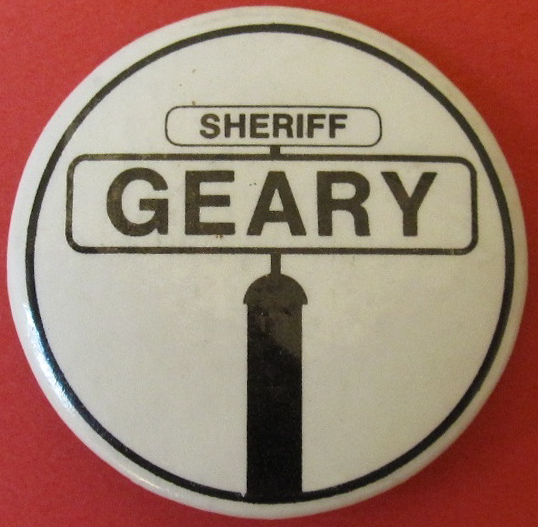 In 1979 San Francisco changed the election format by creating a run-off election if no candidate got 50%+1 of the votes.

The General Election was held on November 6, 1979. 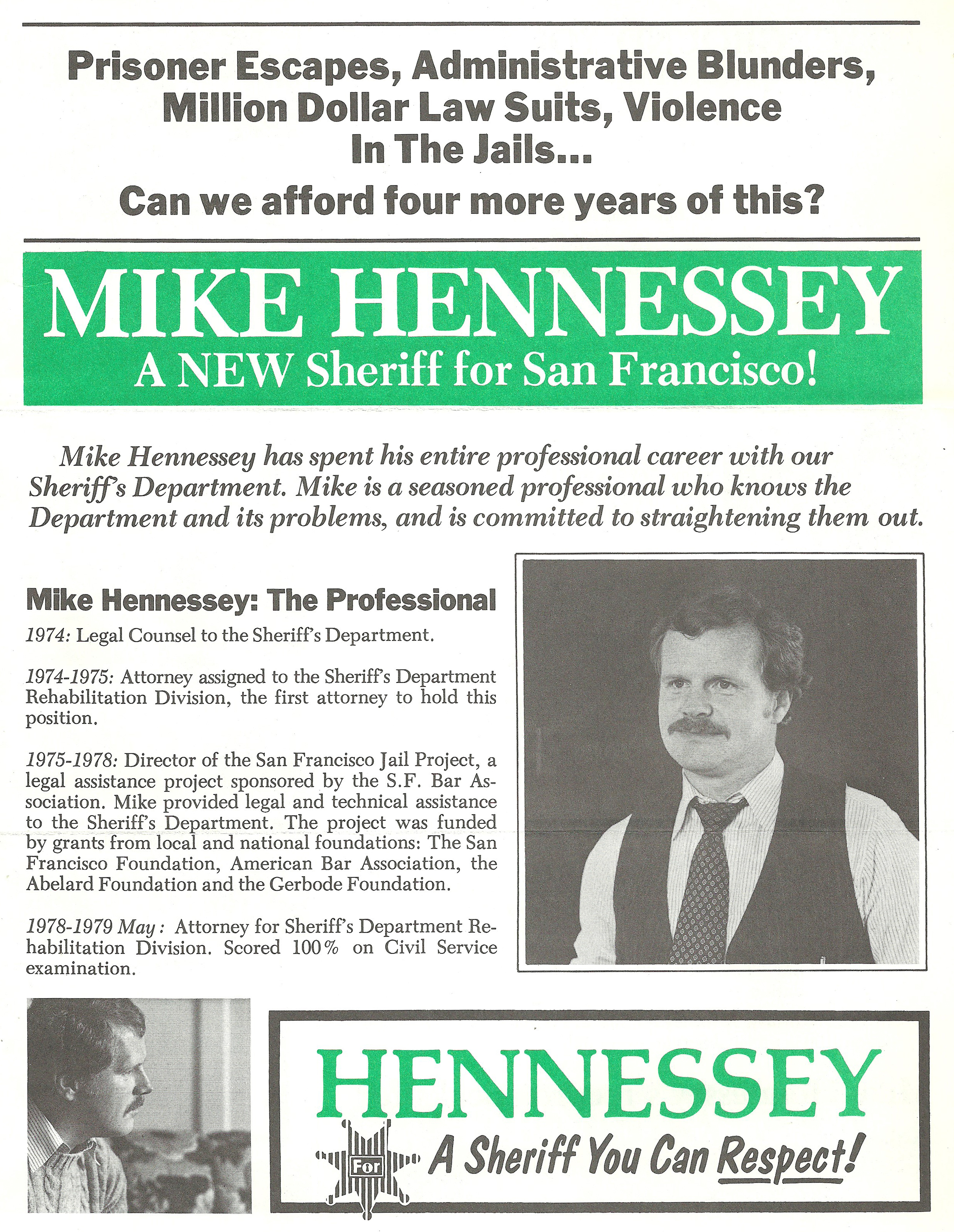 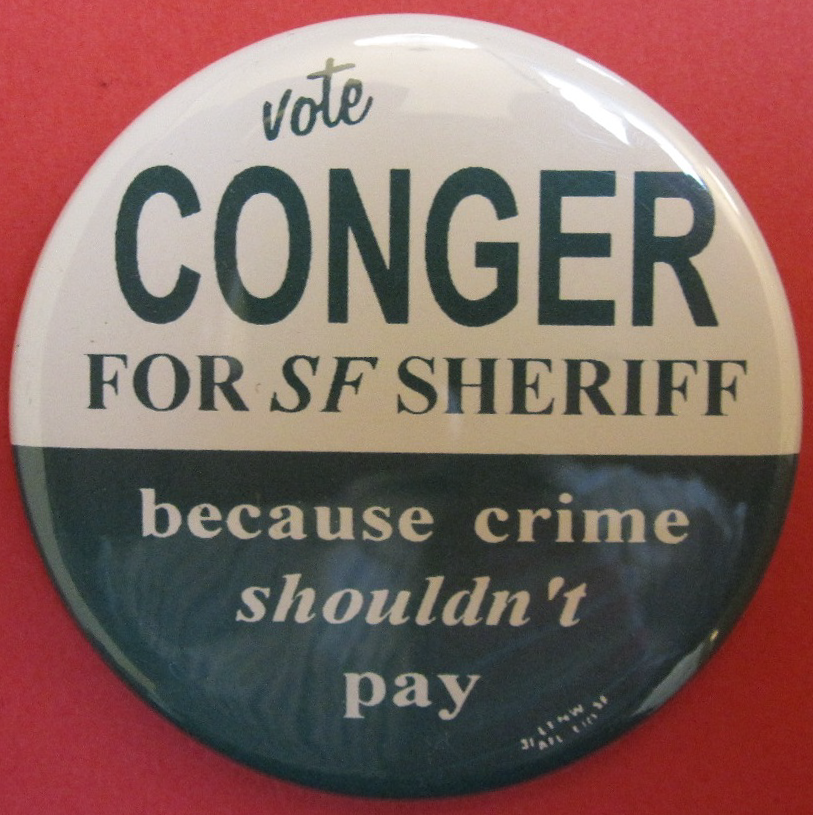 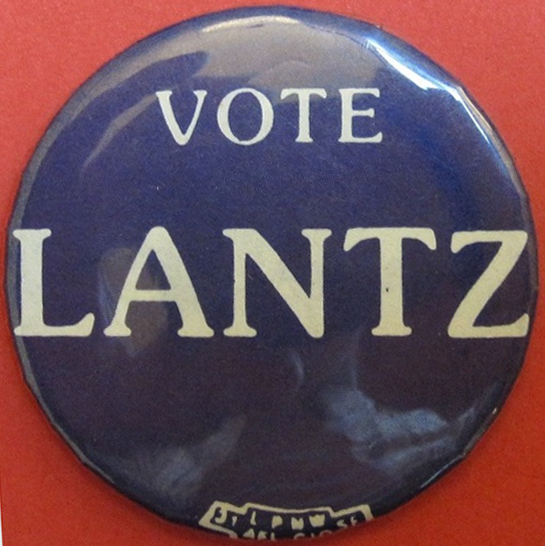 Hennessey ran unopposed and was re-elected on November 7, 1991.

Hennessey ran unopposed and was re-elected on November 2, 1999. 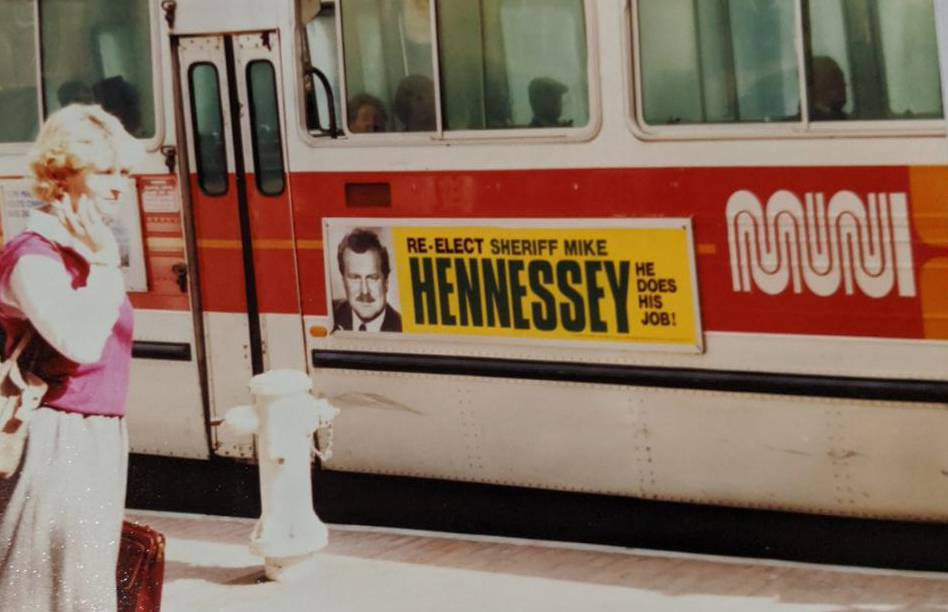 Hennessey did not seek re-election in 2011. 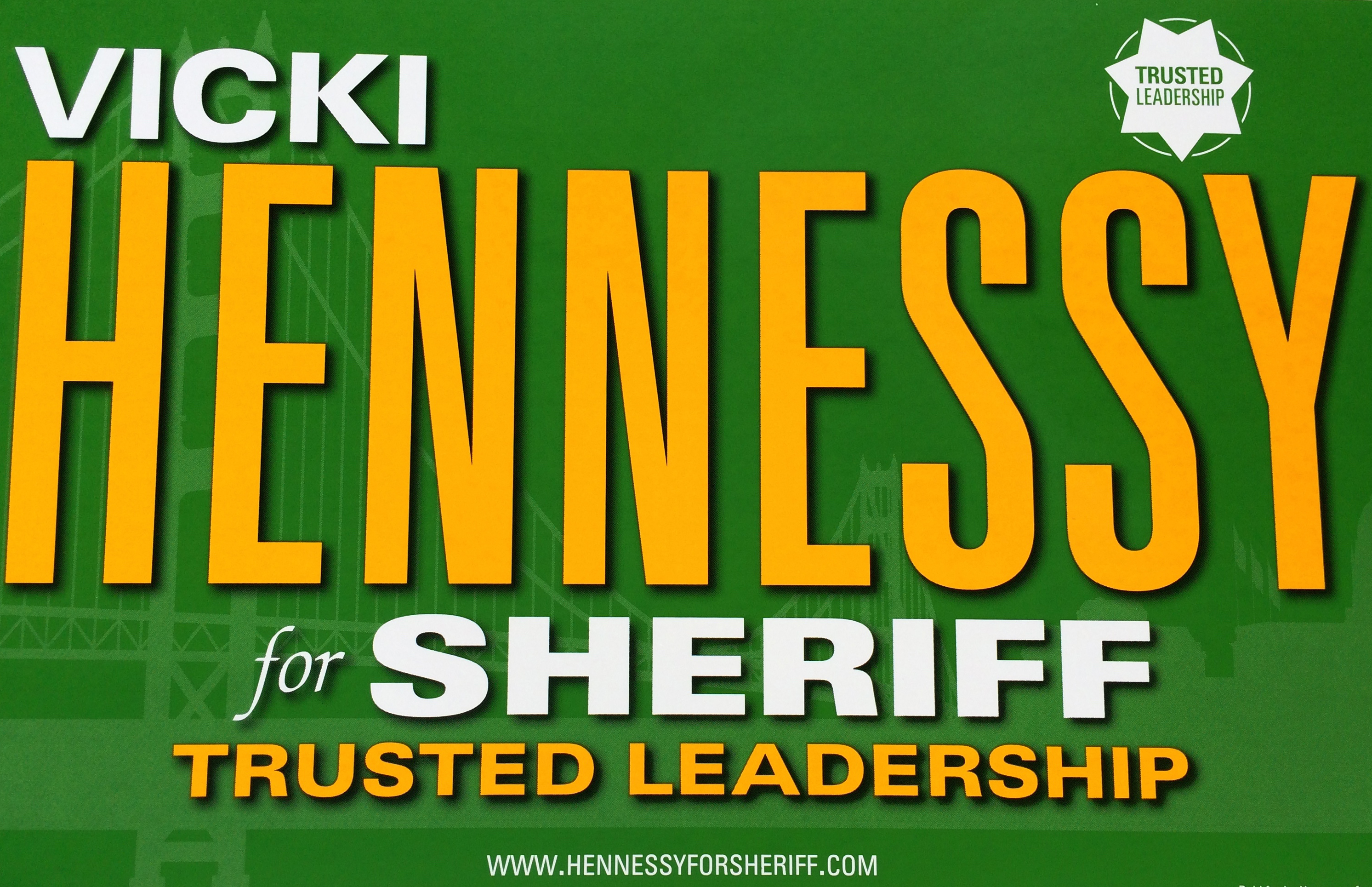 Mirkarimi was defeated in a re-election bid in November 2015. 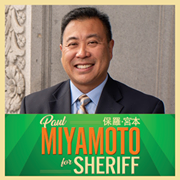 Vicki Hennessy did not seek re-election.

Credits: To the California State Library for use of their San Francisco ballot tickets/slate card files. Thanks always to the San Francisco History Room at the SF Main Library and their always helpful and generous staff. The SFPL's newspaper database and the Library's San Francisco newspaper microfilm collection, and the private collection of Michael Hennessey.